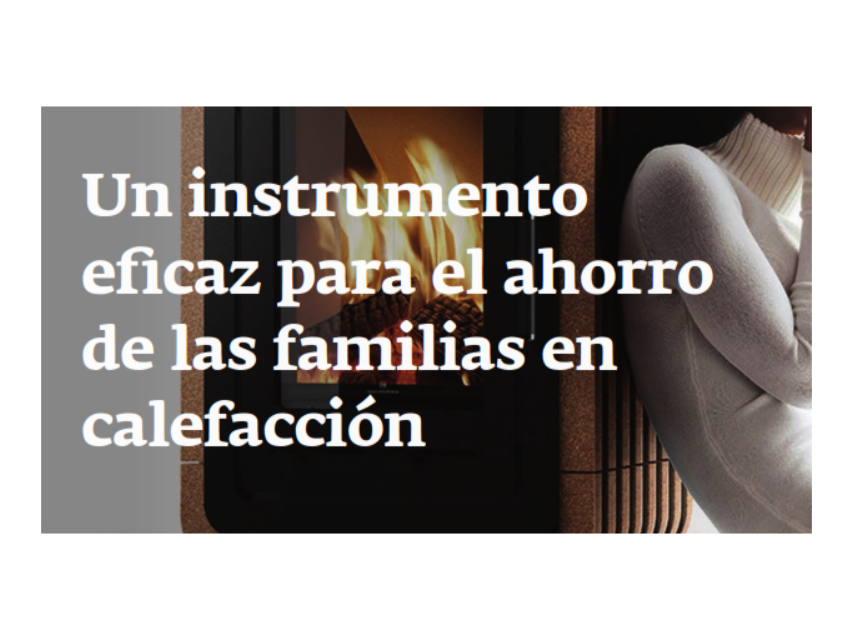 The use of biomass as a heating fuel represents a saving for families that can be up to 66% with respect to the cost of diesel, said Javier Díaz, president of the Spanish Association of Energy Valorization of Biomass (Avebiom), at the opening of the conference on "The sustainable use of bioenergy in Valladolid", organized by the Association in collaboration with the Agency for Innovation and Economic Development of the City of Valladolid.

This day is framed in one of the dissemination actions of the Circular Economy, which Avebiom presents as beneficiary of the Call for Grants 2017 to promote the realization of circular economy projects of the City of Valladolid.

"The implication of the biomass sector with the current trend of promoting the 'circular economy' is very evident," said Javier Díaz. “There are not many energy technologies that comply so consistently with their postulates. The energy recovery of some by-products of the agri-food industry and wood, which are used to produce thermal and electrical energy, allows part of the energy consumed to be returned to the economic cycle, not only during the use of these products as fuel, but also afterwards. , since its ashes can be used for the production of fertilizers; or even the CO2 that comes out of the chimney, to produce food gases and even medical gases ”.

The thermal biomass, he added, "is an important asset to achieve the national objectives of reducing emissions and is also a source of employment and local wealth generation, without any possibility of offshoring, contributing very directly to the revitalization of the economic activity of the environment in which it is produced and consumed ".

According to data from the Avebiom Price Index, Javier Díaz said, "the cost of 2,4 kilograms of wood chips supplied at home (which is the energy equivalent of one liter of heating oil) represents a saving of 66%; although it is likely that this percentage is higher at this time, due to the significant increase in oil registered in recent weeks. "

If olive oil is used as an olive biofuel, the price of 2,2 kilograms (energy equivalent to one liter of diesel), the saving is 49%; and if the pellet is used, the equivalent cost (2,0 kilograms) represents a saving of 38%. In this sense, Javier Díaz recalled that the pellet is the most demanded biofuel currently, "because it offers very satisfactory benefits, both in terms of efficiency and price stability; the cost for the final consumer of the bag of 15 kilograms has been reduced by an average of 3,4% in the last three years ".

Valladolid, at the forefront

On the other hand, the president of Avebiom highlighted the important advances in the use of thermal biomass in Valladolid in recent years. "Ten years ago, in Valladolid 257 stoves and boilers were technologically advanced, or high efficiency, when there are currently some 4.400." And also, he said, "Valladolid hosts the largest biomass heat network in Spain, that of the University of Valladolid, as well as facilities in large neighborhood communities, such as the Fasa Group, which will start operating these days." In this regard, Jesús Gómez, Manager of the Agency of Innovation and Economic Development, stressed the City Council's commitment to the paradigm shift that involves the incorporation of new energy sources and the acceptance by citizens of them. The European project H2020 Remourban, led by the city of Valladolid as lighthouse city, has facilitated this new installation in the Fasa Group and its subsequent monitoring.

The possible solutions with biomass for an independent house or for a community of neighbors was the theme that Juan Jesús Ramos developed, responsible for the National Observatory of Biomass Boilers. And subsequently, some of the success stories in Valladolid were presented by different persons in charge of Veolia, Coinges, Discomtes and Foresa, companies associated with Avebiom.

The following days will be held from 16 to 19 in the civic centers of Delicias, Huerta del Rey, Zona Sur and Parquesol at 19.00 hours.

Related exhibitors
Our Exhibitors
More than 500 exhibitors will present the latest developments, products and technologies available in the international market.
Know them
Noticias relacionadas
ENSO AND ACOR present the largest biomass cogeneration project in Spain
Recognition to the Tiemblo City Council for its biomass boiler
The option of biomass in the industry with the current price of natural gas