# CONGRESSBIOENERGY18, a golden year for a key year in the sector 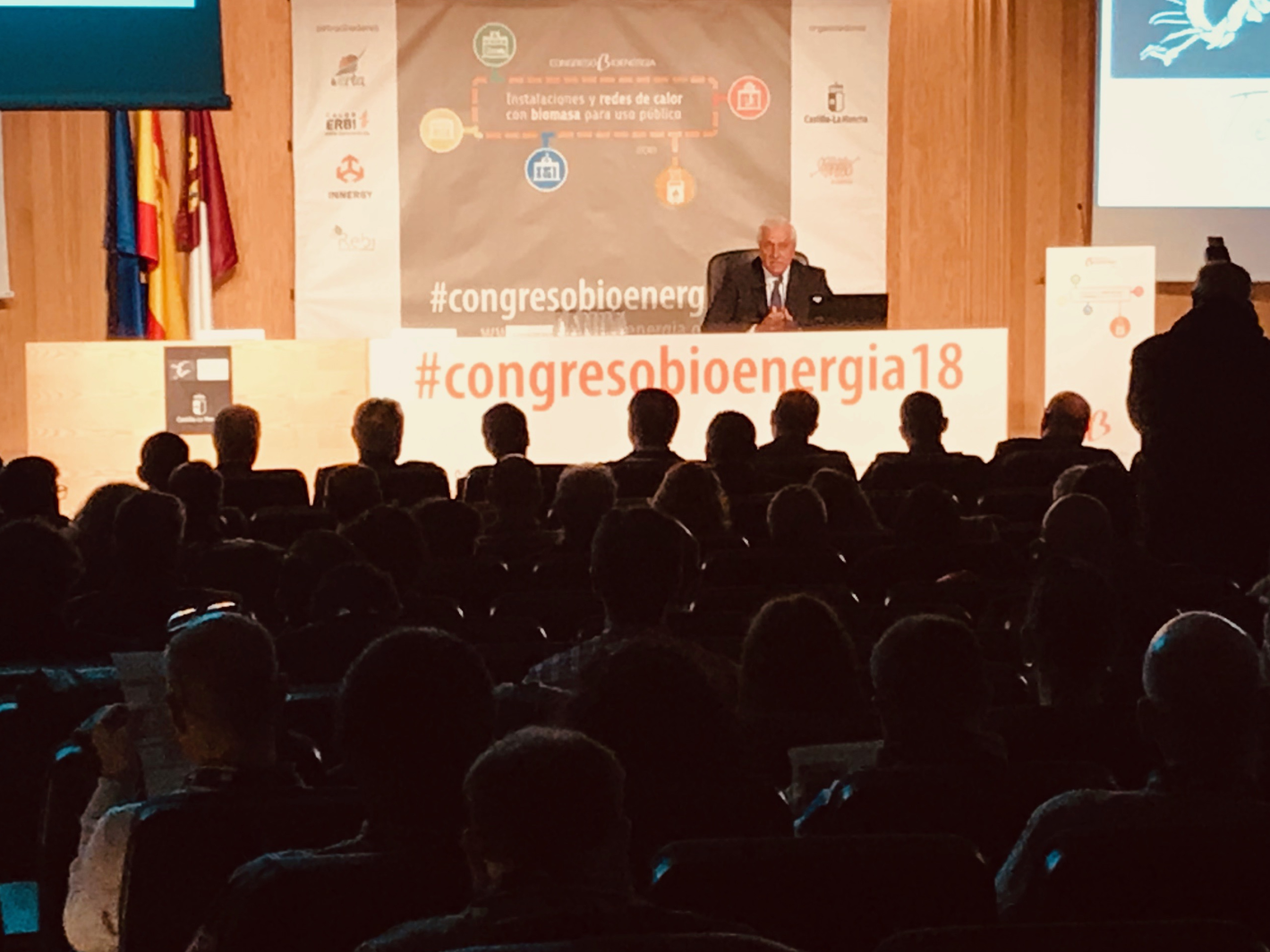 200 responsible and technicians of public administrations and professionals have met two days in Cuenca at #CongresoBioenergia18, which has been dedicated to facilities and heat networks with biomass for public use.

In the Congress-Organized by Avebiom and the Regional Government of Castilla-La Mancha- different models of financing of biomass facilities have been presented for public use and experiences have been shared on how to access funding with European funds from the EIB and aid from other agencies that drive rural development. The process of executing and operating the facilities has also been addressed, recommendations for the drafting of service contracts have been made and success stories have been presented.

The dean of the Official School of Forestry Engineers, Eduardo Rojas, assured that "the challenge of depopulation in Spain can not be addressed if an adequate forestry policy is not put in place; and vice versa". And he advocated the active management of forests, because "it reduces the risk of fires, increases water flows, improves biodiversity and endogenous rural employment".

Rojas said, in this regard, that "the areas most affected by depopulation are precisely those that enjoy greater forest wealth, because they are in the most disadvantaged places, especially in the mountains, with cold hillsides and poor soils". And he insisted that biomass means "an opportunity for employment, the establishment of population and the reduction of forest fires".

According to the dean of the Official College of Forestry Engineers, "if you bet decisively on the bioeconomy it will be possible that the availability of resources will be more adjusted in the future, which will force to design strategies that direct the bioenergetic demand to the resources currently less used or located at the end of the value chain ".

The head of the certification systems in Avebiom and speaker of the Congress, Pablo Rodero, said that although "all the life have been used fireplaces and glories with wood for heating, biomass is not a return, since the modern devices that use Standardized biofuels offer returns of more than 90% and advanced automatic functions, which can even be managed remotely. "

Rodero explained that it is necessary to take into account factors that affect the correct combustion of the facilities, such as the quality of the biofuel. "All this forces us to use quality biofuels with very specific (standardized) characteristics," he said.

To ensure that biofuels are manufactured correctly, they are, as indicated, quality certifications such as BIOmasud® or ENplus®, which require the manufacturer to implement a quality management system.

Finally, Rodero appealed to the assistants, mayors and municipal technicians, so that when bids are published for biofuel supplies, check that those who attend are certified.

For its part, the director of Ceder-Ciemat de Soria, Raquel Ramos, said during his speech that biomass as fuel for installations and heat networks produces the emission of certain gases that need to be known and controlled. For this reason, added Ramos, Ceder-Ciemat has developed studies on the control of emissions in combustion of biomass, based on the quality of fuel in the emissions, the regulation of combustion and emissions, the use of technology of control of matter particulate and seasonal emissions in different facilities.

Calor Erbi, responsible for engineering and installations, Óscar Cela, also spoke, explaining the efficiency and versatility of container-type modular installations for heat networks and welfare buildings with high-efficiency boilers. And he highlighted some of its advantages, such as the speed of installation, the possibility of duplicating supply, the modularity in the assembly and the possibility of changing its location, as well as the price.

For his part, the CEO of Rebi, Alberto Gómez, said that the biomass heat networks are already an example in Spain of energy sustainability and commitment to economic development and job creation in provinces that go through the problem of depopulation .

"The efficiency of public heat networks has evolved a lot in the last 20 years in Spain," said Miguel Ángel Pamplona, ​​director of the Department of Studies at Innergy Heavy Industries. "The solutions that currently exist in the market, both mechanically and technologically, have significantly simplified their use and operation and reduced the amortization periods. This provides a better service to the users and greater profitability for the operators and promoters of the same, "he added.

In his speech, the Head of Production of Erta, Eduardo Naranjo, stressed that with the ENplus® quality certification of wood pellets guarantees the supply of pellets for heating and cogeneration in residential, commercial and public buildings with a "quality clearly defined and constant ".

"It covers the entire supply chain of wood pellets: from the pellet production and supply chain to the end user's warehouse," he concluded.

The largest vineyard in Europe

José Luis Alarcón, President of Grupo Athisa, emphasized the great potential of Castilla-La Mancha, the largest vineyard in Europe, which generates more than 800.000 tons of vine shoots per year, derived from the pruning of the vines.

Huertas said that in order to take advantage of this resource, Grupo Athisa has designed a vineyard valorization system that eliminates metals, stones and sandstones, which allows the user to have clean wood for combustion.

"Thus," he said, "social, economic and environmental value is generated in the adjacent rural areas, creating jobs, a better social environment and a healthier environment, since the burning of vine shoots on the same plot of the farmer is avoided, avoiding the emissions to the atmosphere ".

Noticias relacionadas
HUNDREDS OF NEWS AND INNOVATIONS WERE PRESENTED AT EXPOBIOMASA 2019
Spanish and Finnish companies hold more than 300 B2B meetings in Expobiomasa
Expobiomasa 2019 exceeds forecasts and receives the visit of 16.540 professionals
Related exhibitors
Our Exhibitors
More than 500 exhibitors will present the latest developments, products and technologies available in the international market.
Know them