More boilers in the north, more stoves in the south 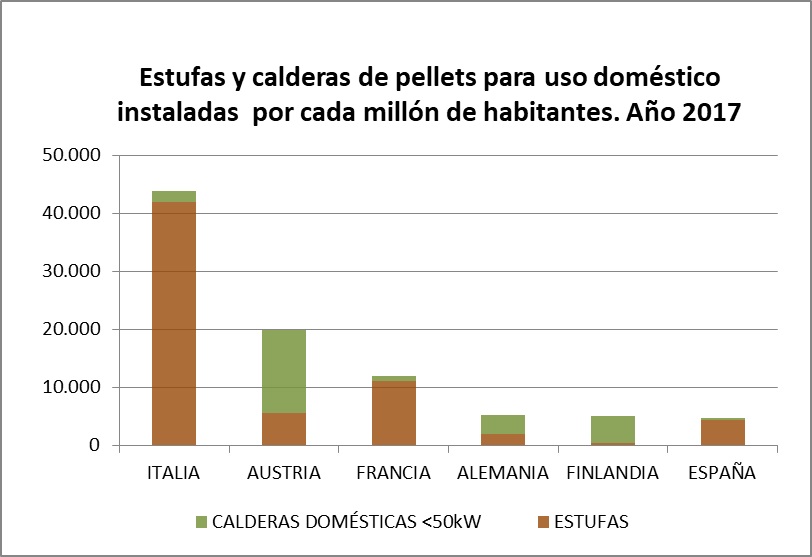 The European trend regarding the installation of new pellet stoves is very positive. From the data from the Statistical Report prepared by Bioenergy Europe, we can estimate that sales increased by 16% between 2016 and 2017. At the end of 2017 there were more than 4,6 in Europe of pellet stoves running thanks to annual sales that exceeded the 570.000 units.

Highlights the evolution in the Mediterranean countries, especially in Italy, which has 2,6 millions of stoves running and leads sales for 10 years ago with 180.000 units sold in 2017, an 6% more than the previous year. One stove was sold for each Italian 340.

In Europe they operate close to one million boilers for domestic use with nominal power lower than 50kW. In 2017, sales increased by 7,5%, until reaching 82.000 units sold.

However, Austria, with 125.000 boilers, the country with the best Tatio per inhabitant to have one boiler for each Austrian 70.

The leading companies in the sector in Europe will be present at the next edition of EXPOBIOMASA.

Noticias relacionadas
Traditional open fireplace versus modern fireplace: the advantages of current technologies
New combined wood and pellet stove
SOLZAIMA, a leading firm in the manufacture of biomass heating equipment and systems, opens a new factory.
Related exhibitors
Our Exhibitors
More than 500 exhibitors will present the latest developments, products and technologies available in the international market.
Know them