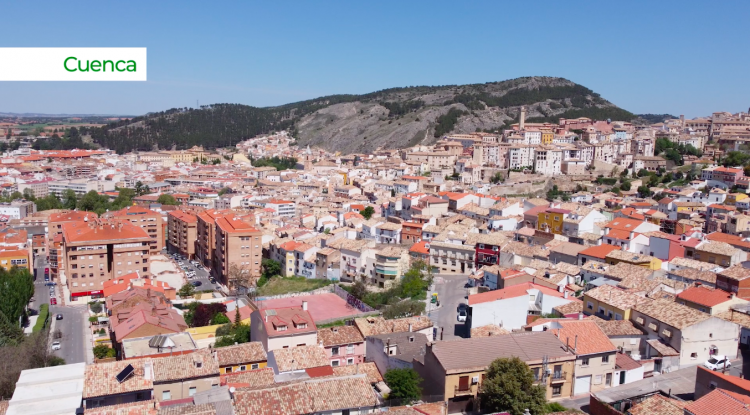 The city of Cuenca will achieve the reduction of emissions into the atmosphere of 25.000 tons of CO2 per year in the city center, without investment cost.

This is the second Heat Network that REBI builds in Castilla-La Mancha after district heating in Guadalajara is already working and expanding its number of users.

La Basin Heat Network will supply thermal energy from biomass to the neighborhood communities, public and industrial buildings of the city of Cuenca.

The Network will originate from a thermal power plant that will be located at Avenida de Cruz Roja Española 11, D, next to the Ford vehicle dealership. From there, it will distribute the energy produced with wood chips through hot water at 90 degrees through pre-insulated tubes that will run through the capital's subsoil. The closed circuit will connect all the buildings that wish to incorporate renewable energy, and the water will return cold again to the plant, where it will collect energy again.

The people of Cuenca who decide to use green energy instead of their fossil fuel to heat themselves will not have to pay any spillage or make any initial outlay since the connection is XNUMX% subsidized, with minimal work in their boiler roomThey only pay for the energy they consume, just as it happens in the Network of Guadalajara.

The Network will have the capacity to connect between 7.000 and 8.000 homes in addition to public and private non-residential buildings of the industrial and commercial sector. The thermal power of the Network will rise to 29 MW, with a biomass boiler of 21 MW and another of 7 MW. It will incorporate a 1MW solar farm for self-consumption on the roof and ground. A buffer tank of 10.000 cubic meters will ensure supply during peak energy demand.

The main novelty is the hybridization of 1,2 MW of the energy produced by 4.000 square meters of concentrated solar thermal field. This hybridization is a pioneer in Heat Networks in Spain: focused sunlight heats a liquid that passes through a series of lenses. Controlling the flow rate of the liquid allows control of the temperature level. The generated heat is then transferred to the end use by directing the liquid through a standard heat exchanger. Flat lenses are used in series-connected panels designed to deliver the required amount of power. Likewise, the recovery of wastewater heat from the Cuenca WWTP with a heat pump is planned.

The city of Cuenca will achieve the reduction of emissions into the atmosphere of 25.000 tons of CO2 per year in the city center, without investment cost.

Advantages of connecting to the Heat Network

Users who connect to the Network will have a minimum average reduction of 10% in the bill of the Community of Owners in heating and domestic hot water (DHW), and can reach up to 50%. Price stability against fossil fuel speculation is another of the advantages for Red de Calor customers, who will have a state-of-the-art kWh (kilowatt hour) meter in the plate heat exchanger and a billing of Useful thermal kWh consumed.

Rebi's new project also offers great technical advantages like the fact that the neighbors will stop storing fossil fuel, noises, odors and discharges disappear, eliminating any risk of explosion or fire. Apart from the more technical benefits, we must not forget that the Network generates around 40 direct and indirect new jobs, that it revitalizes the nearby rural areas, and that it will mean a recovery of the heat that is wasted by the industries that are located in the area of ​​action of the Network.

The biomass will come from, among other places, the municipal forests. The capital of Cuenca has more than 53.000 hectares of public forests owned by the City Council, and the province as a whole has more than 800.000 wooded hectares, which helps biomass production and consumption.

Related exhibitors
Our Exhibitors
More than 500 exhibitors will present the latest developments, products and technologies available in the international market.
Know them
Noticias relacionadas
Aid available for HEAT NETWORKS with renewable energies
The Palencia campus of the University of Valladolid will debut its new biomass heat network in October
The installation of pellet stoves and boilers in the domestic sector grew by 40 percent in 2021