Txomin Enea lights the 'district heating' with biomass prepared to supply heating and hot water to the 1.500 homes 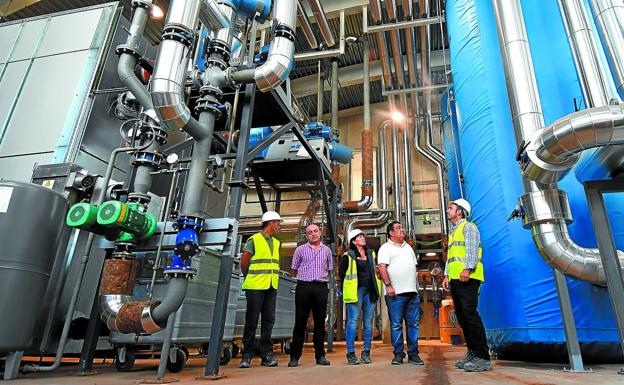 It is so big that it needs a building of its own and so clean that if anything ever comes out of its chimneys it will be water vapor. The district heating of Txomin Enea is ready to supply heating and hot water to the 1.500 homes that will make up the future neighborhood once the two construction phases are completed.

It works with biomass and, as explained by the City Council, is the largest system of this type for domestic purposes that exists in Euskadi. It has already passed the last technical tests and from October it will start to serve the first residents to move: the 28 families whose homes had to be demolished to make way for the modern blocks that have changed the horizon in the vega of the Urumea.

A joint venture will manage the service for fifteen years. The facility has a storage silo of 440 cubic meters of capacity, the two biomass boilers of 1.400 kW power and the two natural gas accessories, the control room, the fans that reduce noise to a minimum and the deposits of water, of 20.000 liters.

Thanks to the district heating, the emission of gases will be "almost zero" and each user can regulate the temperature of his house and control consumption in real time, which in turn should translate into a more efficient use of heating and cooling. Hot water. Savings are expected close to an 15% on the bill.

One of the keys to the success of these systems are the eco-efficient characteristics of the technical equipment used to generate the heat, which allows to minimize the electricity consumption to produce the maximum thermal energy. The power plant has a power of 7.400 kW and a network of pre-insulated pipes that run underground and that connect with each of the buildings in the neighborhood with little loss of heat in the course.

The City Council, through the Development Company, has financed the execution of the building and the thermal installations of the system for an amount of 2,9 million euros. The project has a subsidy of 726.000 euros from the European Union, within the framework of the 'Replicate' program