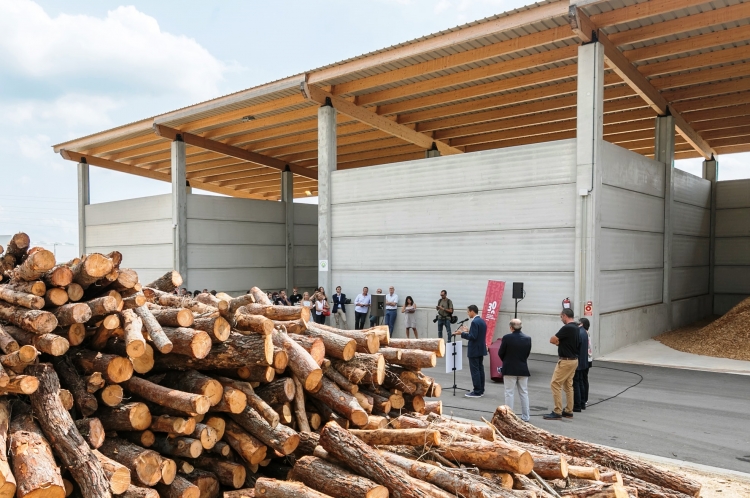 New Regional Biomass Logistics Center, a key part of the Bosques del Vallès fire prevention project based on the boosting of forest biomass. The Logistics Center of Biomass is the center of operations of the Regional Service of Forest Biomass and it allows to close the circle of the project of forest exploitation for the obtaining of spill that feeds the boilers of biomass of the region. Thus, a key equipment for obtaining clean energy and proximity and to ensure forest management that reduces the risk of fire.

The Logistics Center is one of the three legs of the project Bosques del Vallès at the equipment level. At full capacity, it can move up to 9.500 tons of wood, which is the 25% of the annual vegetative growth of the pine surface in the region. The center has a chip production capacity of 6.650 tons per year. It has had an investment of 500.000 euros, it has been located on a plot of 8.430 metros2 and has a warehouse 846 meters2.

The other two infrastructures are two biomass boilers of the Physical Activity Service of the UAB and the Terrassa Health Consortium. The annual consumption of sliver of the UAB and the CST represents the 45% of the capacity of the Logistics Center. In the Terrassa hospital, energy is generated that services the sanitary equipment and would be equivalent to feeding 735 homes. Terrassa City Council, through its Local Agency for Energy and Climatic Canvi, has already received from the hands of AVEBIOM at 2010 the "FOSTER BIOENERGY" Award for its municipal environmental policy in favor of the rationalization of the use of energy and the reduction of greenhouse gas emissions with biomass. The municipalities of Ullastrell, Vacarisses and Viladecavalls have also joined the service to supply their boilers.

The objective of the project is twofold:

The Vallès Occidental, a vulnerable territory

The Vallès Occidental is an essentially urban area with a high population density, higher than the 900.000 inhabitants, which has an important industrial fabric, but also with a high percentage of forest area (59'1%), of which the 90 % of which are privately owned (more than 3.600 owners), constitute an area with little management, which has a relatively low productivity and is quite vulnerable to climate change and forest fires.

On the other hand, the region promotes sustainable energy and contributes in the fight against climate change and in favor of air quality. It is estimated that the emission savings of C02 could reach more than 5.400 tons per year.

Noticias relacionadas
Germany's pellet production in the first half of 2020 exceeds 1,5 million tonnes for the first time and the sale of pellet boilers grows by 150%.
The pellet and circular economy in the furniture sector
The ecological heat asset
Related exhibitors
Our Exhibitors
More than 500 exhibitors will present the latest developments, products and technologies available in the international market.
Know them