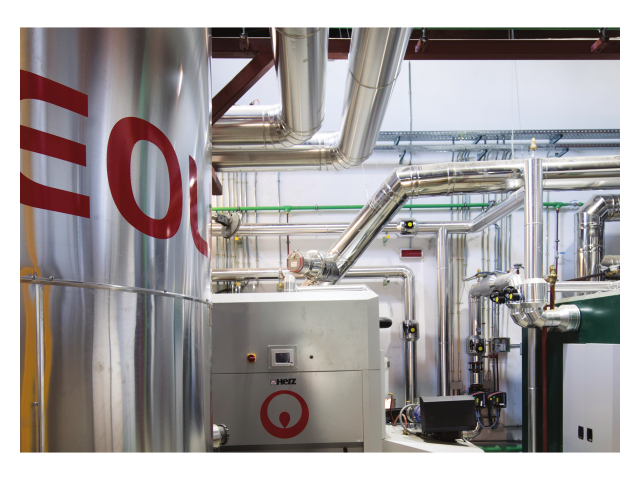 The energy cost will be reduced by around 40% and will prevent the emission of 930 tons of carbon dioxide per year.

The total investment of the project is 1,5 million euros, contributed by Veolia, European funds and the City Council of Valladolid.

The property association Grupo Fasa de Valladolid has just launched a biomass heat network, whose realization is part of the European project REMOURBAN, whose main objectives are to substantially increase the efficiency of resources and energy, drastically reduce emissions of gases greenhouse and accelerate the deployment of innovative technologies.

Cartif and Veolia, both associated with AVEBIOM, have participated in this project, the first in the Valladolid capital to supply heating and hot water in the residential sector.

Among the improvements of the equipment is the installation of a biomass heat network with a total installed power of 1MW. The project involves an investment of 1,5 million euros, financed by Veolia, the European Commission and the City Council of Valladolid; and will provide service to a score of buildings with a total of 398 homes, with a network of pre-insulated pipes of 825 meters in length.

The community of owners receives an integral service that, in addition to the energy management of the installation, includes the financing of the work and the realization of the same, the maintenance of all the equipment and systems, the total guarantee of all the installed equipment and the service of technical assistance to the neighbors, the 24 hours of the day, every day of the year.

There is also an environmental commitment, as it is expected to reduce energy costs by 40% and a forecast of 750 tons of CO2 avoided each year. Another differential characteristic of the project is the centralization of domestic hot water.

The FASA Group's heating network is connected to the global energy management system, which allows the installation to be monitored in real time and improvements made quickly and efficiently.

The project of the heat network of the Fasa Group was adding adepts in a year. In just 12 months, went from having the support of 15 20 portals, to have unanimity of all of them.

The scope of the global project, which added to the heating reform of the facades to achieve better energy efficiency, made it necessary to have the support of all the neighbors for its implementation. One of the main obstacles, according to the owners, was initially the ignorance of the scope of the work, which is why an information campaign was launched so that all the neighbors could know every detail. Personal meetings, visits to other networks, even the City Council turned to inform the neighbors with the presence of the Town Planning Councilor.

Between the first voting and the second, some changes were introduced in the project that definitively decided the opinion of all the neighbors towards a yes. Among the improvements that were incorporated, it is worth mentioning the integral reform of the heat network, as well as the option of domestic hot water (DHW).

The boiler system, which was 50 years old, required the presence of a technician during the time it was in operation. As the heating was operative from ten in the morning to ten at night, the community had the services of workers. Now these two employees have joined the Veolia staff since the new system does not require permanent presence. A modern telemanagement system allows its distance control during 24 hours and the technicians make periodic revisions. The neighbors have a total guarantee for 18 years, in which Veolia will assume the cost of any incident.

The key to success is the choice of biomass as an energy source.

In Valladolid, in addition to improving the surrounding pine forests and mountains, reducing the risk of fires and generating employment, it avoids the emission of CO2 from the combustion of fossil fuels (natural gas, butane, diesel) that affects climate change. It should be remembered that the city of Valladolid has gone from having seven days with a temperature above 32 degrees in 1978, to 20 days in 2017; And according to forecasts, it will be 38 days in 2050.

Related exhibitors
Our Exhibitors
More than 500 exhibitors will present the latest developments, products and technologies available in the international market.
Know them
Noticias relacionadas
Aid available for HEAT NETWORKS with renewable energies
The Palencia campus of the University of Valladolid will debut its new biomass heat network in October
The installation of pellet stoves and boilers in the domestic sector grew by 40 percent in 2021