Pellet consumption in Europe grew by 18 percent in 2021 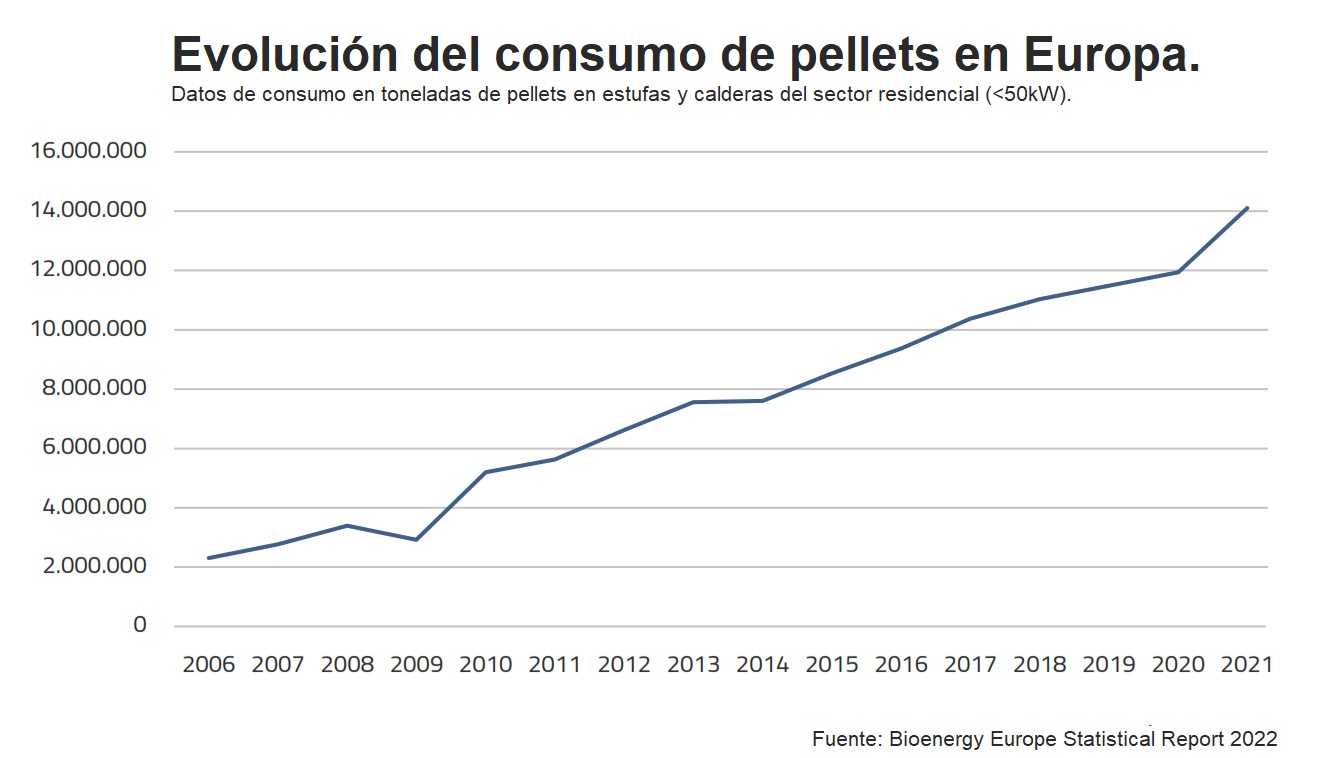 In two years, 250.000 new pellet boilers have been installed in Europe.

The consumption of pellets in Europe in pellet stoves and boilers with power up to 50kW for residential heating, reached 14,1 million tons in 2021, in 2020 it was 11,9 million, which indicates an increase of 18% more than the previous year. They are data from the last Statistical Report Bioenergy Europe.

On the supply side, in 2021, European production increased by 9% and reached 21,6 million tons of pellets without counting the production of Russia, Belarus or Ukraine. Being practically enough to supply the 14,1 million tons that were needed to produce heat in the residential sector and 7,2 million tons that were consumed in the industrial sector (boilers, generators and burners with powers above 50KW), and thus solving part of the energy dependency to which European countries are subjected.

What reasons do we find for this acceleration of consumption.

The increase in the demand for pellets has been caused by the energy crisis of fossil fuels that began in the first half of 2021, before increasing with the invasion of Ukraine. In countries such as Germany, France or Poland, the installation of new biomass boilers in the residential sector has exhibited enormous growth rates, in many cases reaching a fourfold increase. In fact, it is estimated that in the last two years some 250.000 new pellet boilers.

The current energy crisis is making it possible to demonstrate the reliability of biomass as a source of energy to heat Europe, which requires stable policies and favorable incentives that help accelerate decarbonization and energy independence of gas imports. To that end, fiscal measures have already been implemented in some countries to ensure that wood pellet prices remain at acceptable levels for consumers, fossil fuel subsidies have been eliminated, and even the installation of new gas or diesel boilers.

What is the situation this winter and the forecast.

The increase in the demand for pellets, the interest in stockpiling pellets for the entire "winter", the trade sanctions against Russia, the scarcity of raw materials and the increase in the cost of production have raised the prices of pellets throughout Europe. But despite everything, the price of pellets has proven all these years to be much less volatile than fuel prices and to be much more competitive than electricity and fossil gas, which are reaching record levels.

The job of the European manufacturers in the sector is to work 100% to try to guarantee the supply of heating throughout Europe. Work is already being done on new and more efficient pellet mills since last year, which is more than predictable to increase production capacity with new pellet factories and extensions in countries that produce pellets in order to meet the increase in European demand in the coming years and discount the growing imports from Russia, until the invasion of Ukraine.

Related exhibitors
Our Exhibitors
More than 500 exhibitors will present the latest developments, products and technologies available in the international market.
Know them
Noticias relacionadas
ENSO and GARCÍA-CARRÍÓN promote a new thermal generation project of 10.000 tons of biomass
Salvador Escoda: new range of Mundoclima® BIOTHERM biomass stoves
Ferroli will set up a line this year in Burgos to manufacture 6.000 biomass stoves per year.