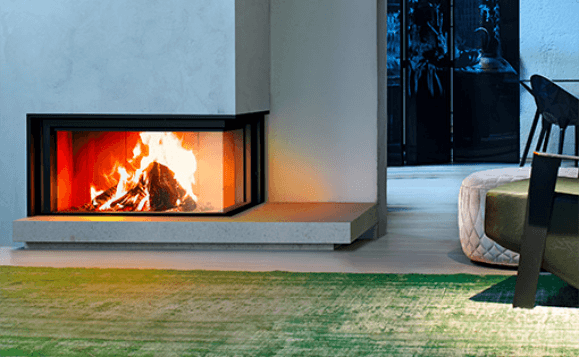 Open fireplaces: why they should be avoided

Open fireplaces are open flame, glassless fireplaces that still exist in many homes, both traditional and newly built. The open fireplace should be considered a decorative object or to cook sporadically on the coals. But it should not be considered as a heating solution, due to its poor performance and high particulate emissions.

The modern fireplace has the hearth closed with a tempered glass, so that the heat that is produced inside, instead of being dispersed through the flue, is recovered thanks to the fact that it is introduced into the domestic environment through vents. In this way, the calorific power of the firewood is used more efficiently and economically. For this reason, modern fireplaces, with the same wood used, heat more and are much less polluting compared to traditional open fireplaces.

Yields, which in the open fireplace reach only 15-30%, they reach 80-90% in modern chimneys and particulate emissions levels are reduced more than eight times.

By using pellets instead of wood, the modern fireplace can offer a further 10% reduction in the level of harmful emissions. It has been calculated, for example, that with simply replacing open wood fireplaces or obsolete wood stoves with innovative pellet products would result in a reduction in PM10 emissions of over 80%.

In addition to the ecological aspect, the modern pellet fireplace offers numerous practical advantages, mainly related to the possibility of programming the on and off according to your own schedules and needs. Fuel storage is also much simpler, since the pellet bags take up less space and are not dirty.

Noticias relacionadas
WEBINAR: "BIOMASS EMISSIONS: ARE THEY BEING ACCOUNTED WELL?"
New combined wood and pellet stove
SOLZAIMA, a leading firm in the manufacture of biomass heating equipment and systems, opens a new factory.
Related exhibitors
Our Exhibitors
More than 500 exhibitors will present the latest developments, products and technologies available in the international market.
Know them