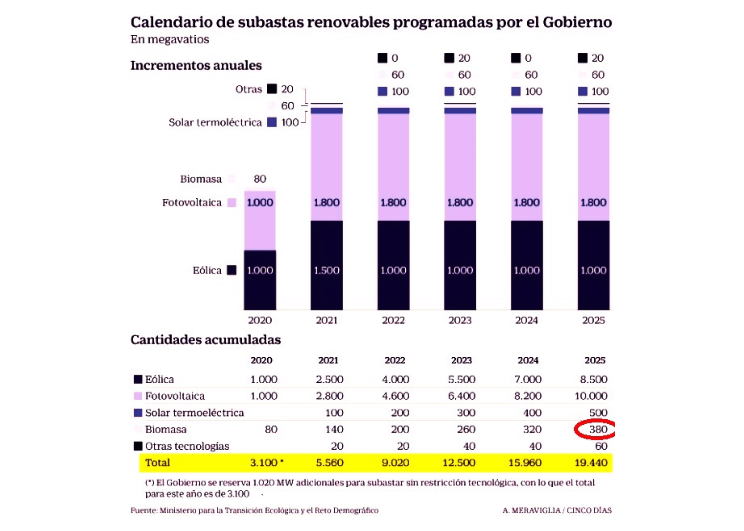 The first auction will be held in December 2020.

The launch of 380 MW in 2025 represents an increase in demand for biomass of forestry and agricultural origin of about 4 million tons. Currently, with about 900 MW operating in Spain, the demand is around 9 million tons of biomass, mainly residues from the oil industry, the wood and paper industry, and other biofuels of forest and agricultural origin.

The Ministry for the Ecological Transition and the Demographic Challenge has planned call an auction in December for the allocation of economic regime of electricity generation with biomass for 80 megawatts (MW). This is reflected in the five-year calendar included in the ministerial order that will regulate this new auction mechanism and that will begin its public hearing process.

The ministry wants to carry out a 3.100 megawatt auction this year: 1.000 MW will be used for wind power; another 1.000 MW to photovoltaic, and 80 MW to biomass, leaving the rest of power to be assigned without technological restriction.

Subsequently, and every year, between 2021 and 2025, 60MW will be allocated for biomass power generation. In total, a minimum allocation of 380 MW of biomass electricity generation is planned. The auctions that the ministry wants to carry out until 2025, sets a minimum target of 19.440 megawatts, highlighting photovoltaic and wind power as the main recipients of the assignments.

Until November 18, allegations are being presented in order to further adjust the auctions to an efficient energy model, and once the order is approved, each call will be specified by resolution of the Secretary of State for Energy, which will be published in the Official State Gazette and which will detail the rules of application in each auction. This new economic regime of renewable energies It is essential to comply with the decarbonisation commitments that Spain acquired in the Paris Agreement and as a member state of the European Union. These commitments were already included in the National Integrated Energy and Climate Plan (PNIEC) 2021-2030, which provides for the installation of around 60.000 renewable MW in the next decade and which includes, among its measures, the development of this type of auctions. For electricity generation with biomass, the PNIEC expects to reach 1.408 MW in 2030, thus favoring a renewable technology that works 24 hours a day, 7 days a week and favors the natural environment and Spanish rural society in an essential way.

Noticias relacionadas
The option of biomass in the industry with the current price of natural gas
Madrid: 23 million euros for renewable thermal systems in companies and the public sector
MITECO allocates 33,66 million to promote 57 BIOMASS projects with a total power of 435 MW of power
Related exhibitors
Our Exhibitors
More than 500 exhibitors will present the latest developments, products and technologies available in the international market.
Know them